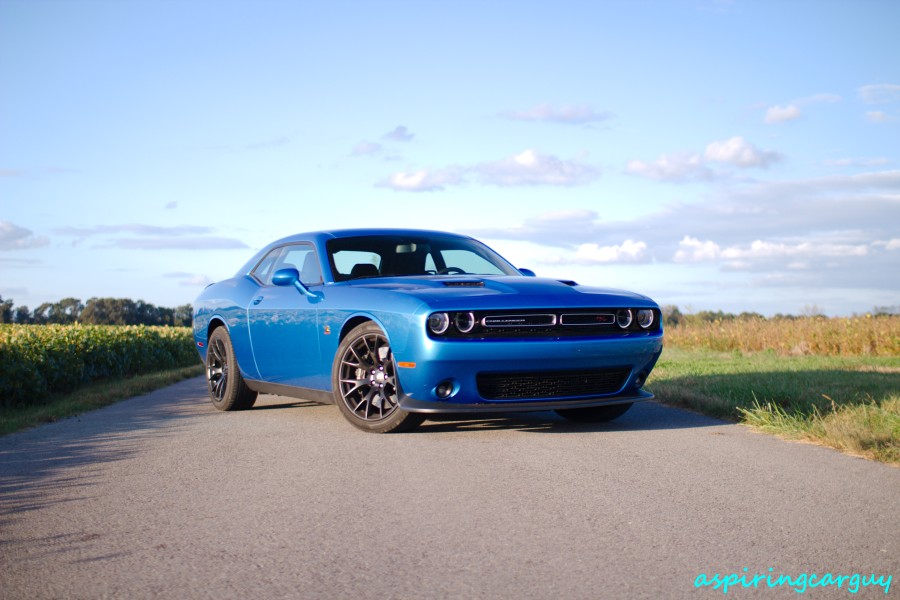 B5 Blue is the only color. There are no other options.

Joking aside, I wanted a color that would stand out in a parking lot, and this color does just that. If you buy a Challenger or Charger but don’t get one of the “high impact” colors, I think you missed the point. These cars are cartoons on wheels and you shouldn’t take yourself too seriously with one. It’s not that the more sedate colors don’t look good, it’s that they dilute the brash and ridiculous refusal to change that Dodge has about these cars. Dodge also probably doesn’t have money to change them, but I digress.

I traded in my 2014 V6 Camaro for this new 2018 Dodge Challenger R/T Scat Pack. You can make up your own jokes about the name Scat Pack, but the important thing is that the interior is cloth, which I prefer over leather, and it has the 6.4 Liter Hemi. This car is my new daily driver, and it makes an absolutely necessary 485 horsepower and 475 lb.-ft. of torque. It has the “Dynamics Package”, essentially meaning it has the Hellcat’s wheels and brakes. If you care, the wheels are 20″ x 9.5″ and the tires are 275/40/ZR20 Pirelli P-Zero Neros. Brembo brakes with six pistons in the front and four in the rear haul the Blue Whale down from a stop. Yes, it’s automatic. No, I don’t care what you have to say about that.

There are three facts of life: death, taxes, and the Dodge Challenger is a heavy car. Despite what the Internet would have you believe, that does not mean the car is totally incapable of handling. The steering is heavy, but not artificially heavy. The brake pedal bites into those huge Brembos immediately, unlike my Camaro I traded in and the 6th Gen Camaros I test drove before buying the Challenger. The ZF 8-speed transmission shifts way faster than the 8-speed auto in the 6th Gen Camaro, and that was one the main selling points of the Challenger over the new Camaro. I don’t know if the new GM 10-speed is better or not, but I think Chevy should’ve sucked it up and paid ZF for their unit like so many other companies.

I doubt I can tell you anything about how the 6.4 Liter Hemi performs that you don’t already know. It sounds wonderful at a cold start and when you throw some throttle at it on the road. The accelerator pedal is a little touchy at low speeds, but that’s not always a bad thing. The Challenger also downshifts on its own when coming to a stop, which sounds mean and helps lighten the load on the enormous brakes. What’s not to love about an automatic with engine overrun sounds?

It hasn’t been all sunshine and roses though. I had only owned the car three days when it left an oil stain on the garage floor. With just 241 miles on it, my car was going back to the dealership. I received a call from the service department at the dealership the next day saying there was a loose bolt on the variable valve timing controller. After I saw the picture, I was surprised there was a bolt in there at all. This appeared to fix the problem, but a few weeks later, the leak was back. I took it back to the dealer and learned the VVT module needed to be replaced. So far it appears that the leak is indeed fixed. Aside from this nuisance, I only have one nitpick about the car. There are a couple rattles coming from interior trim components. The rattles temporarily subside when pressure is applied to the trim, but it is still annoying.

If you have reasonable expectations for a Challenger, you will be pleasantly surprised. It’s not revolutionary, but it’s still a rewarding driving experience. It goes zero to illegal with haste and can still hang on in most corners. I’ve never driven a pro-touring car, but I would have to assume that a new Challenger is similar to a factory built pro-touring car.

It handles road trips very well, cruising happily down the interstate slightly under 2,000 rpm. Any excuse to dip into the loud pedal will put a smile on any enthusiast’s face, and leaving your foot there will rapidly increase the number on the speedometer to a point which I should not put in writing. If you give it a lot of throttle from a stop, it will blow the all-season tires away, even with the traction control on. I’ve never driven a Hellcat, but I understand why traction is so hard for them to come by. My car has the same wheels and tires as the Hellcat, but has 222 less horsepower. That gap is larger than the total power output of most cars from the 1980’s. Clickbait YouTube video titles of 1,000 horsepower cars makes you forget that 485 horsepower is still a lot. And it’s still fun.