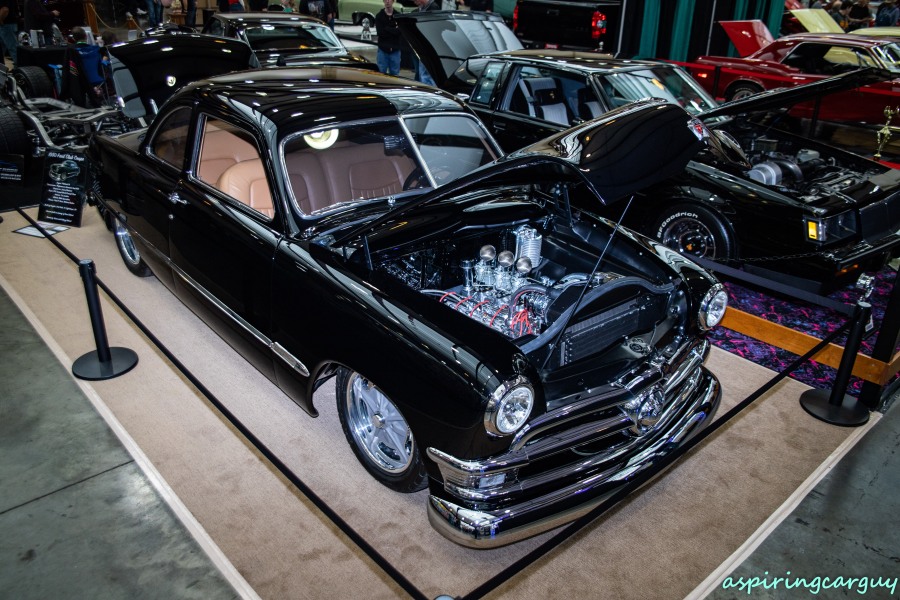 If you’re anything like me, you’re ready for car show season after the Holidays. Or maybe you’re just always ready for car show season. In either case, you’re in luck with the O’Reilly Auto Parts World of Wheels. The 2020 Chattanooga World of Wheels was my second straight year attending the show, and it did not fail to impress once again. Just inside the exhibitor’s entrance was a build as outstanding as it was unique. This build, known as lowlybenz_dh on Instagram, is a 1976 Mercedes Benz 300D and features a stately gray paint job with a rich saddle brown interior. Mercedes builds of this vintage aren’t common to begin with, but the few that are out there usually have some kind of late-model engine swap. This one maintains a diesel engine and shows it off like a proud hipster fiance in her engagement photos. If the engine wasn’t enough jewelry, this beauty features an Airlift air suspension system to make sure the rocker panels are intimate with the ground. Finish it off with a Focal audio system and Nardi steering wheel and you have a car that might just Rock You Like a Hurricane.

Diesel isn’t supposed to be this pretty.

This is one LOW Merc.

The Mercedes wasn’t the only star from Germany to make an appearance at World of Wheels, as a swarm of Volkswagen Beetles took over a portion of the show floor in a wide array of styles. If entomology isn’t up your alley, perhaps you can get behind a cool 1959 VW Double Cab packing a Scat performance 2234cc engine and rare Speed wheels. The double cab was a fresh build and it showed, with a beautiful pistachio green and off white paint job. I learned a lot about these scarce automobiles, including the fact that they have a flat undertray like a high-end racecar. The double cab’s owner Mike Turner said about 80% of the sheet metal on his truck has been replaced with new stampings made in Colombia using the original dies. In the never-ending quest for more speed, even in a vehicle famous for being slow, Mike intends to install a new 2234cc engine with a 4 bbl carburetor and turbocharger.

Vaughn’s Hot Rods out of Fort Oglethorpe, Georgia brought out several builds for their booth in the center of the display hall. One car they had on display was a black 1969 Z/28 Camaro that was still in the works, but the real gem was their 1950 Ford Club Coupe. Also painted in a coat of glossy black, this shoebox Ford is an absolute stunner. Good paint is one thing, but it’s never the whole picture. The same with chrome; it don’t get you home. The total package takes more than just looking brand new. And believe me; this Ford had the total package. The stance was spot on with a tasteful Ridetech suspension drop tucking in the Billet Specialties wheels wearing BF Goodrich rubber. Wilwood disc brakes behind those retro wheels haul this little shoebox down to a stop with ease. All of that said, my favorite part of the car is the engine bay. Power delivery comes from the iconic Ford flathead V8 mated to a Ford AOD transmission. The flathead in this ‘50 is topped with Edelbrock cylinder heads, an Offenhauser intake, and three Stromberg 97 carburetors. The ribbed metal canister on the firewall? It’s an aftermarket oil filter made by Moon for flatheads, since flatheads didn’t come with an oil filter from the factory. The interior is a clean and simple tan leather with stock gauges, just the way I would have built it. 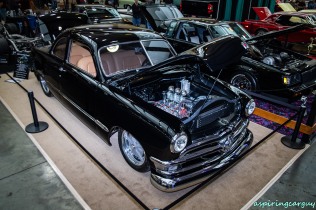 This Shoebox Ford is a stunner.

The Flathead V8 is a piece of art.

I’ll be the first to tell you I’m not a huge motorcycle guy and that I need to learn more about them, but I would be remiss not to talk about the bikes of World of Wheels. Motorcycles had a much larger presence this year than last, including everything from a stock vintage Honda Goldwing to a Boss Hoss trike turned into a Vietnam War memorial. Custom bikes were plentiful and diverse. Aside from the trike, there were several bobbers sporting throwback gold leaf designs and engraved brightwork. One even had engraving on the carburetors! These were just the traditional V-Twin-powered bikes; one old school build had a Moto Guzzi longitudinally-mounted engine. Then there was the Marilyn Monroe tribute bike; featuring no less than three airbrushed images of the Hollywood icon.

There was no shortage of Indian motorcycles either – a good sign for the current incarnation of the storied manufacturer. As cool as all these bikes were, one vintage Harley Davidson Knucklehead build stands out in my mind. It was a clean build without any crazy paint or wheels. Simple black and chrome go a long way when well executed, as they were on this bike. Long tailpipes accent much larger fenders than one usually finds on a Harley these days, and a tooled leather seat makes for a nice centerpiece. This bike isn’t for the novice – the lever coming up from the transmission means it’s equipped with the infamous suicide shift. While that may not sound all that bad, realize that you have to take your hand off the handlebars in order to change gears. My balance is bad enough walking on flat ground, so I’ll limit myself to just admiring a bike like this.

I could go on for hours about the cars, trucks, and motorcycles of World of Wheels. The quality of all the builds is top notch, and the builders and owners are equally as knowledgeable about their machines. World of Wheels and similar shows are largely not the “you gotta drive it” type of car show, but they are a great way to spend a day in what is otherwise the offseason for car events. What’s not to love about a car show immune to rain?