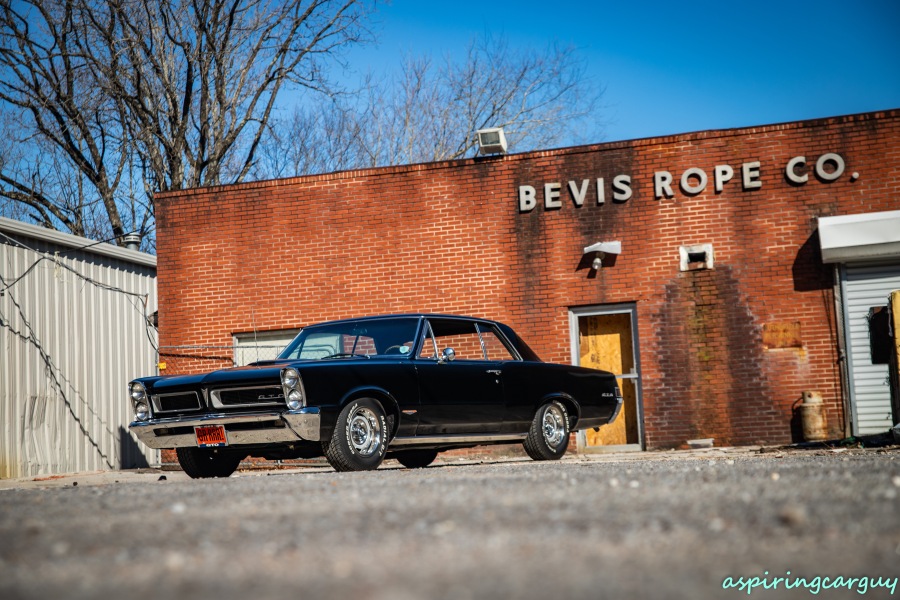 After a year of canceled events and a rather cold winter, cabin fever was at a maximum. Nashville Cars and Coffee nearly filled its lot to capacity by the time the show officially started at 8:00 AM on March 6th. I arrived shortly after 8:00 and passed row after row full of Subarus, modern American muscle cars, and German autos. I finally found an empty spot for my 1965 Pontiac GTO next to a clean mid-90’s Impala SS. Pleased with barely squeezing into the show, I set off to see what other cars made the trek.

One standout was a Coyote-swapped 1970 Ford F100, which the owner said was built by a NASCAR crew member. Given its perfect low stance, I assumed it might have been swapped onto a Crown Vic chassis; however, it had a stock frame with front and rear subframes from a Crown Vic. The side exhaust exiting through the bed added a nice NASCAR-inspired touch.

About the time I finished talking to the F100’s owner, I saw a group of people circled up like high schoolers around a fight in the hallway. “There has to be something special over there,” I thought. As I got closer, I saw through the crowd the unmistakable side mirror of a Pagani Huayra. A rare sight anywhere, this was the first Pagani I have seen in person. It was every bit as remarkable as the automotive press made it out to be. Bare carbon fiber glistened in the early morning sun as onlookers gawked at the Italian hypercar. Tires as wide as a large pizza sat patiently waiting to propel the V12-powered monster on its next journey. Gorgeous titanium exhaust poked through the tail panel, but I was more enthralled by the badge that appeared to be glowing. “Huayra,” it said. “That’s hard to spell,” I said. As with most of the crowd, I was too occupied with this exotic machine to even notice the track killer parked next to it. A fellow enthusiast pointed out to me that it was, in fact, a McLaren Senna. “Oh,” I remarked, “I didn’t even notice it wasn’t a standard McLaren. They all look so similar.” After likely offending the Senna’s owner and McLaren fans everywhere, I moved on to the nearly deserted area where the other supercars were parked.

Vintage 4×4’s dotted the parking lot as well. Early Broncos of different color and lift kit height stood ready to enjoy the afternoon. I stared longingly at a mint short wheelbase Land Cruiser Prado, and admired some FJ40’s as well. Not to be left out, the local International Scout club brought out some pristine examples, too. Finally, I spotted a classic Ford 4×4 that was a late entry to the show. I admired the owner’s restraint to not park the truck on the small grassy median in front of it. I would not have possessed the same wherewithal.

Satisfied with my time at Nashville Cars and Coffee, I set off to Chattanooga to pick up a friend for the next leg of my trip. I learned the virtues of aerodynamics as I battled a constant headwind and side draft from tractor trailers, but fortunately avoided traffic. I picked my friend up and decided I wasn’t in a hurry, so I entered the hotel address and checked the glorious “Avoid Highways” option in Google Maps. Before we even got through Downtown Chattanooga, we observed a peculiar sight. There was a girl walking a goat down the sidewalk. I was too confused to think about taking a picture, but there were other witnesses. We cleared out of downtown, and I found a good spot for an impromptu photoshoot at a closed factory. After a few hours of checking out old cars in people’s yards, small North Georgia towns, and many trees, we reached our destination. I was in the mood for a burger and a beer for supper, so we picked a nearby restaurant. I could see the confusion on people’s faces as we drove down the narrow street among high-end retailers in my rumbling, rattling, smelly Pontiac. I saw a Jaguar F-Type and some kind of Lamborghini in the valet area, so I knew at least there were cars around louder than mine.

We arrived early Sunday morning at the Perimeter Mall for Caffeine and Octane, and were directed to the classics lot. Evidently, we were not quite early enough as a C&O staffer blocked off the lot right before we got there. It was full. Disappointed, I resigned myself to the overflow area. Of course, this is a show so large that the overflow area is its own treasure trove. That area held such gems as a first-gen Monte Carlo that shook the earth as it drove by and a donk with dual quads and a blower sticking through the hood. The car club area at C&O holds trucks, Hondas, muscle cars, and more Subaru WRX’s than every dealership in the South combined. One of the WRX’s belonged to a friend, who had made the drive up from Birmingham. Unfortunately for him, someone hit him and ran on the way home. He’s fine, and the car wasn’t hurt too badly, but I felt terrible for him as his previous WRX was totaled after being in multiple accidents that weren’t his fault. Subarus aside, A pristine Ram SRT-10 and slammed custom Jetta were my personal favorites from this part of the lot.

The classics lot might not have showcased my GTO, but it did display some real stunners. There were multiple Ford high-boy 4×4 trucks, an early sixties’ Dodge Power Wagon, and a burly squarebody four-wheel-drive Suburban. Of course, not everyone is as enamored with old solid-axle off-roaders as I am. For those other people, rare non-Ferrari Italian cars could be their thing. Corvettes? Of course – stock or modified. Take your pick. What about nearly priceless racing icons? Why, yes. How about an original Ford GT40? It was for sale if you have the coin.

We left the show and went to meet a friend for lunch. I pulled into a large and mostly empty parking lot ahead of the Sunday lunch crowd, coming back to reality that not every lot is full of interesting cars. Aside from a stock WRX and a late-model Charger SRT8, the lot was full of monochromatic, egg-shaped runabouts. While my friends and I enjoyed a sunny Atlanta afternoon on the patio, the Charger fired up. The Hemi roared through obviously-not-stock exhaust and startled my friend so badly she almost jumped out of her chair! I laughed like any car guy would, but quickly apologized for laughing at her expense. Hopefully she isn’t reading this.

I could tell you that the multi-million dollar hypercars I saw in Nashville, the vintage racecar I saw in Atlanta, or the classic off-roaders were the best part of the weekend, but that just wouldn’t be true. There’s nothing better than seeing friends you don’t see often enough, and making the trip in a classic car made it all that much better. I already want to get back out there. The road less traveled is a cliché, but it is a place for reflection, relaxation, and restoration. The time you think you don’t have may just turn out to be the best time you’ve had in a while.